Donald Baechler was born in Hartford (Connecticut) in 1956. He lives and works in New York. Baechler has created, with wit and humour, a metaphorical language of a popular culture which has gained him a wide reputation as a second-generation Pop Artist. “I’m interested in discreet and very mute objects, and I’ve never really been interested in narrative or psychology or these things which many people read into my paintings and probably into the sculptures,” Baechler remarked recently about his work, which has been exhibited worldwide since the early 1980s. Some twenty years ago, in an effort to re-learn drawing, Baechler set about inventing a naïve vocabulary of lines and forms. It was geared – paraphrasing the work of Jean Dubuffet – to the world of images used by children, naïve artists and the mentally ill. 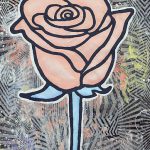 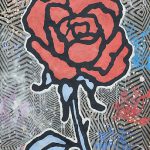